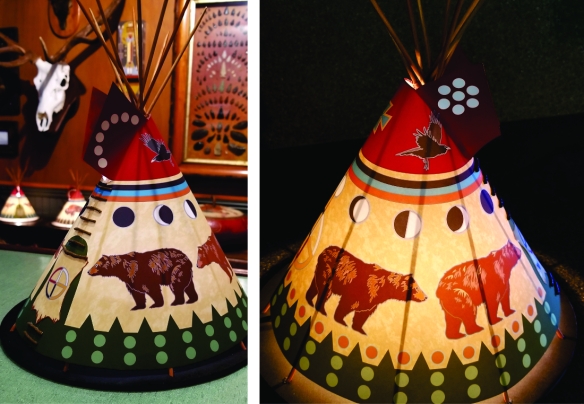 Among many Native Americans Bear represents extremely strong medicine – including special powers in the areas of wisdom, strength and healing. Bear is strongly associated with the Medicine Man or Shaman of several tribes.
The Medicine Wheel has been used by generations of Native American tribes for health and healing. It embodies the Four Directions, as well as Father Sky, Mother Earth, and Spirit Tree – all of which symbolize the dimensions of health and the cycles of life. Many different interpretations can be found. Native American medicine wheels have the colors black, white, red, and yellow in the four quarters of a circle. Bear is generally associated with the West, Autumn, and the color Black.
Native American Indian lore describes Raven as a creature of metamorphosis, symbolizing change and transformation. Raven has also played a part in the Creation myth of some tribes.
The blue cross represents Venus, the Morning Star, which brings wisdom.
Circles on smoke flaps are stylized symbols of constellations. Pleiades – the Seven Sisters or Lost Children [depending on tribal heritage] and the seven stars that form Ursa Major – The Big Dipper or Great Bear.
Also represented on Bear Lodge are forest trees, ‘dusty’ or ‘fallen’ stars, and moon phases.

Tipi Lamps are 13″ tall – the oval base is 10.5 x 9.5″. The lamp fixture has a 7 W incandescent bulb with 6′ brown cord and toggle switch. To replace bulb open hinge on bottom of Tipi.

Tipi Lamps are $95. each – Shipped within USA is available for an additional charge.